That is, make your players pass under pressure and fatigue.  Here are two passing drills for basketball coaches to use to accomplish just that.

5 Lanes Passing Drill.  The objective of the drill is for the offense to get the ball past half court as quickly as possible.  The timer starts on the first pass and stops when the ball is caught past half court. Here are the rules: 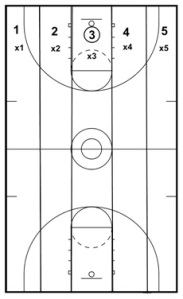 1)    No dribbling.  The ball can only be advanced up the floor by passing it.

2)    All Players must stay in their lane for the entire drill.  That goes for both the offense and the defense.  There is no double teaming the basketball.  You can use floor tape or cones to mark the lanes.

3)    If the defense steals the ball, the drills and timing starts over, but offense goes to defense and defense goes to offense.

5)    Basketball rules apply.  Travel, fouls, 5 seconds. The only rule that doesn’t apply is that there is no 10 second violation.

6)    Players can pass to any teammate.  They don’t have to be in lanes next to each other.

Here are some optional adaptations that you can make to fit the needs of your team:

The best way to determine what works with your players is to run the drill and adjust as needed.  Or, you can add in an adaptation or two from time to time to keep the drill fresh.
Argentine Passing combines passing with conditioning.

Time the drill for one minute.  The drill starts over (and so does the 1:00 time) if any of the following infractions occur:

Another way to run the drill is to add 30 seconds on to the time every time one of the above violations occurs.

The drill requires eight players.  If you have more than eight players, have the extras get behind one of the positions shown in the diagram.

The drill begins with 1 and X1 (in the diagram above) holding basketballs. You can have the players pass either to their left or their right.  Once you decide which direction you will pass, all passes will need to be made in that direction for the entire minute.

Make sure that players have their eyes up in the middle of the floor so that they don’t run into a teammate.  For the entire minute, the players catch the ball, pass to their right and then run to take the spot directly across from them.

These are not only passing drills for basketball, but are multi-purpose drills.  Another benefit is that in 5 lane passing, the players also work on the skills of pivoting and getting open.  In Argentine Passing, you are working on conditioning and also making perfect passes and catches while tired.

These are just two examples of passing drills that hold players to a higher level of accountability than the standard passing drills do.  For all of your passing drills, find ways to hold your players to the highest standards of execution as well as putting them in game conditions.